Categories:
Archives:
Meta:
February 2009
02/25/09
Whatever Gets You Through the Nightâ¦..or February
Filed under: General
Posted by: Gina Uhlmann @ 9:19 am

Normally I can find some joy just about anywhere,
but in February, I sometimes have to go looking for it.
Usually it has me searching for light.
A trip to the Conservatory, which is filled with flowers, light AND oxygen, usually does the trick.
When push comes to shove, there is always the beautiful light
that comes through my kitchen windows in the morning.
If there is a flower in the house, I find myself grabbing my camera,
and precariously balancing vases, vessels, or bowls on the two-inch ledge before I even realize what I am doing!

As the song goes;
âSilver-white winters that melt into springsâ
BRING IT ON! 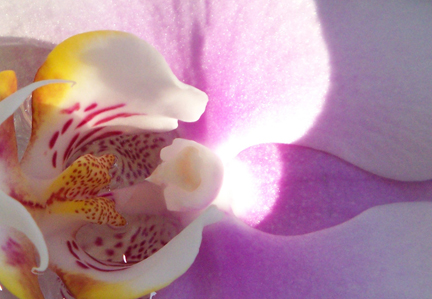 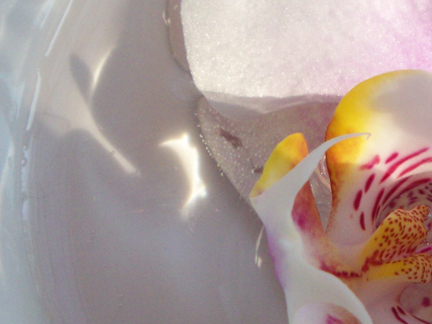 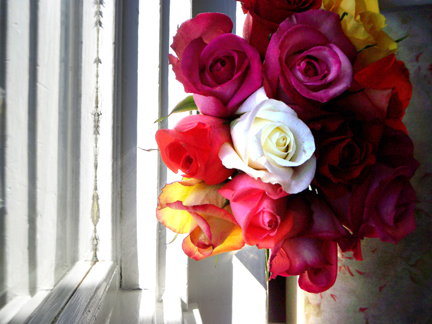 We all have our own beliefs about where creativity comes from.
I have always felt that in my brightest moments, anything inspired had very little to do with me.
It has always felt that the more I can let go, the more able I am to allow “something else” to take hold.
Do I completely understand this? No.
Do I accept and trust this? Absolutely!

The above is just a preface to what I am posting below.
It is an excerpt from Elizabeth Gilbert’s musings and research on creativity.
I have to admit that I haven’t read her book, Eat, Pray, Love,
but I highly recommend watching the entire 20 minute video.
The link is posted at the bottom.

Elizabeth Gilbert talks about a meeting with the US poet Ruth Stone.

âI had this experience recently where I met the extraordinary
American poet Ruth Stone who is now in her 90s, but sheâs been a poet her entire life.

She told me that when she was growing up in rural Virginia, she would be out working in the field, and she would feel and hear a poem coming at her from over the landscape. She said it was like a thunderous train of air, and it would come barreling down at her over the landscape.  When she felt it coming, because it would shake the earth under her feet, she knew that she had only one thing to do at that point, in her words, was to run like hell.  She would run like hell to the house, and sheâd be getting chased by this poem, and the whole deal was that she had to get to a piece of paper and pencil fast enough so that when it thundered through her, she could collect it and grab it on the page.

Then there were the times where, this is the piece that I never forgot, there were moments where she would almost miss it, and sheâs running into the house and sheâs looking for the paper, and the poem passes through her, and she grabs a pencil just as itâs going through her.  Then she said she would reach out with her other hand and she would catch it, She would catch the poem by itâs tail and she would pull it backwards into her body as she was transcribing on the page, and in these instances the poem would come up on the page perfect and intact to the word, but backwards from the last word to the firstâ.

It is a snap shot, voyeuristic image of a simple, but somehow glorified world.
What appeals most to me about this style, is that something unspectacular may have happened right before, and may again be pedestrian right after, but at the millisecond the shutter is released, a captivating moment is caught. Â

However, what if the image is not just an instant frozen in time?
What if everything leading up to, and continuing after, is just as mesmerizing?
How can a still photograph of a dancer ever hope to tell the story of the entire dance,
or show the nuance that led to a kiss?
This is where film and video have always appealed to me,
where I have always felt the whole story of a moment could be told.

With the advent of digital camcorders, and countless digital editing programs,
it is now possible to work in film without going to film school, and investing in massive
amounts of equipment.Â  I find that more and more I have been thinking
about the movement in the moments.

I am certainly just a freshman in this world of filmmaking, but am committed to continuing my studies!

Below is the ending of the montage that I did for my sonâs 8th grade class graduation.
I used a medium-end consumer digital video camera, I canât wait to use a higher-end camera like the big boys!